A bit of a mouthful but a great race. Race no.7 in the Runfurther series was a race within a race as the Lakes 10 has short, long and extreme versions. Luckily we only had to do the long – the extreme gets few entrants and even fewer finishers. Our long might only be 45 miles and so a ‘medium’ for Runfurther but they were a tough set of miles with over 5600m of climb and a sting in the tail. 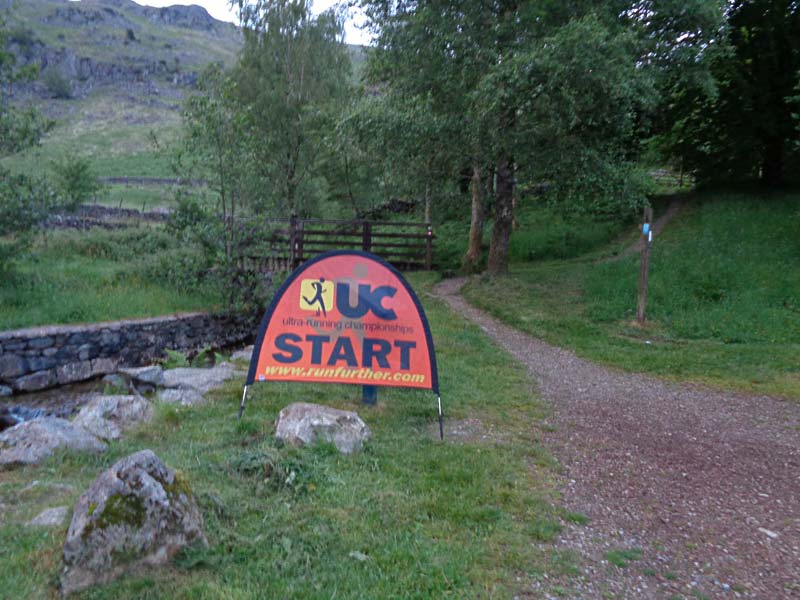 I ‘d been fretting about this race for some time. I am not really sure why although a day in wind, rain and clag on the route a few weeks ago had not helped. I somehow was convinced this could be the one to scupper any hopes of a Grand Slam. In the end the weather was superb- a bit warm and sweaty in the valleys but cool and misty on the tops. Even better I had good company almost the whole way round.

Having registered on Friday afternoon, put up display boards and banners plus been for a short reccee with Andy and Dick I decided I was hungry. Coffee and cake in Booths cafe did not fill me up so I ate half a freshly baked french stick of bread before tea. I still had room for spaghetti bol. Feeling hungry before a race worried me and I hoped my noble but perhaps foolish decision to donate blood on Thursday afternoon would not become a major issue. For most the race starts with a bus ride from Keswick football club to Swirls car park on the eastern shores of Thirlmere. We camped there overnight and so I gained an hour in bed although I did not sleep well. In the morning the midges were biting so once Bob had bravely set up the start banner we lurked in the van waiting for the coach of runners and race briefing at 4.45am. 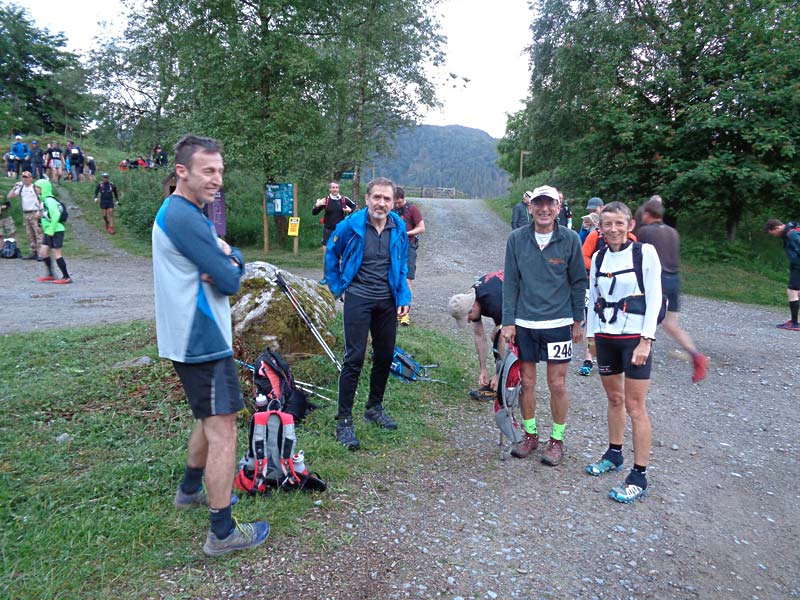 Nick was in the States for the Western 100 but many friends were here. I had a chance to chat to Dick, John V, Mary, Nicky, Carmine, Andrew and David before we were off. A quick dib of the Si cards at the bridge and it was straight up Helvellyn. 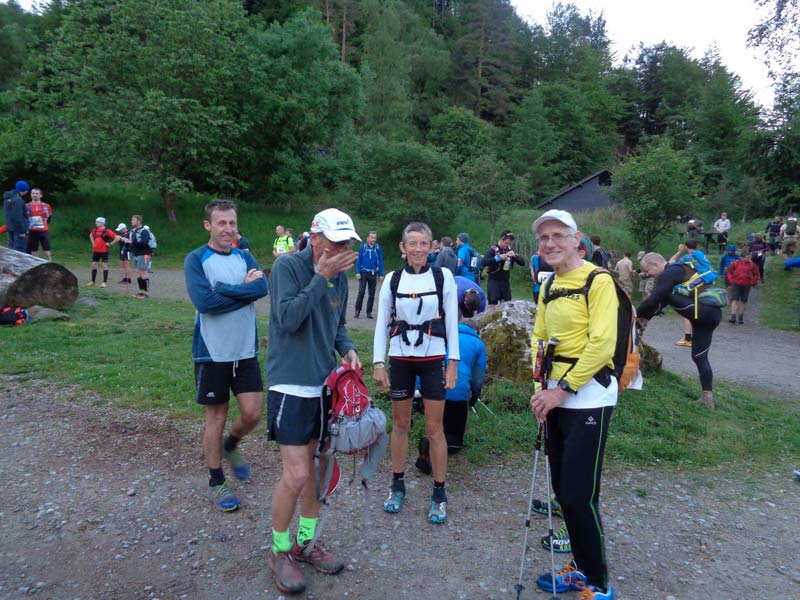 I am not great at fast or steep starts but did not want to lose those I hoped to run with later. I had to let Andy go but managed to stick with Carmine – he lives in Norfolk and must find it very hard to train for this. It was misty but less so than when Peter and I made our nav blunder last year. After the trig point I had planned to go west on the race line. 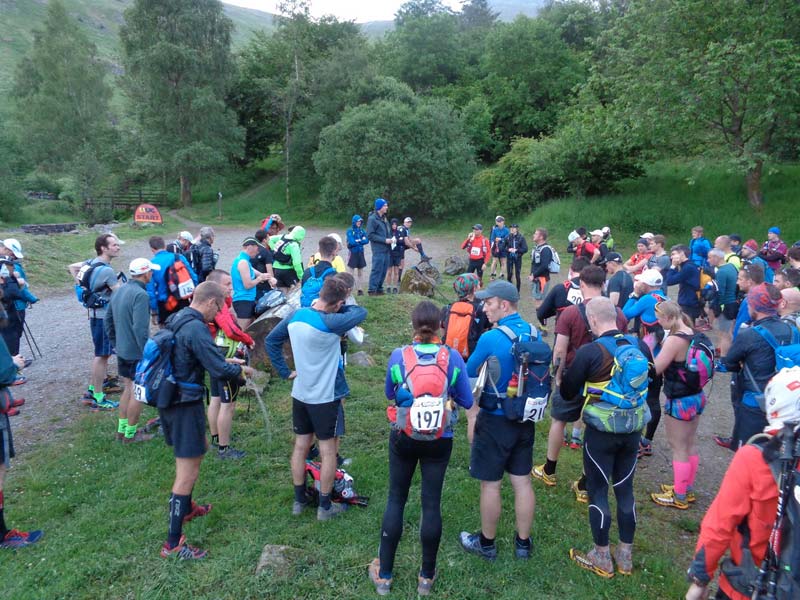 I bottled it for a few minutes and then braved it. Just as well it worked OK as Carmine and a few others seemed to come with me. It was steep but we were soon across Comb Beck and onto the main path plus we had gained some time.

Our first CP was at Steel End car park but I had no need for food or water yet as I was carrying plenty and anyway having caught people up I wanted to stay with them. David and I left together and headed up boggy Wythburn. It was already very warm and only 6.30am. The Sportsunday photographers were a bit further up and their bouncy enthusiasm always puts an extra spring in my step. 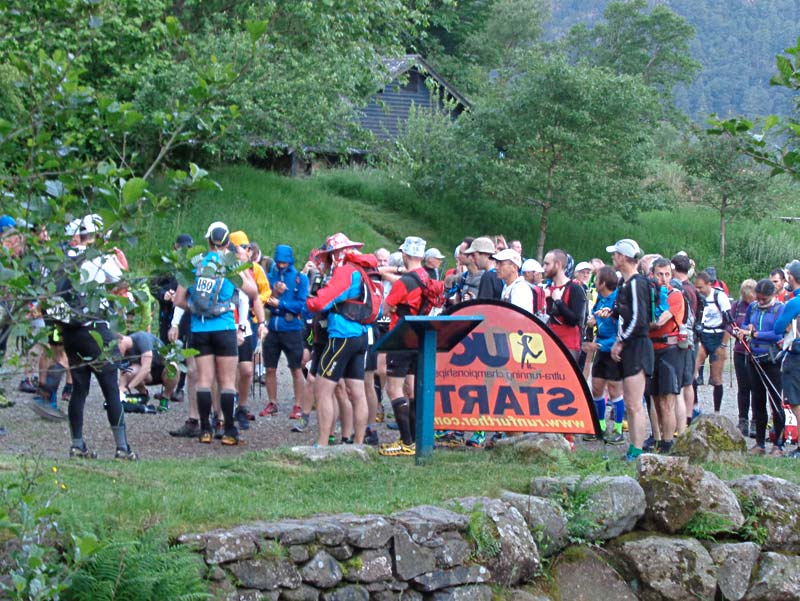 A small group of us arrived at High Raise almost together and I was looking forward to the grassy descent to Stake Pass. My quads had other ideas and I had to ease back and cajole them a little. They relented and let me catch the other below Rossett Pike. Nearing Angle Tarn David and I turned left to join the BG trod up Bowfell but nobody seemed keen to come with us. It was hard work but I told myself it was the last big climb for a bit and it was cooler up there. 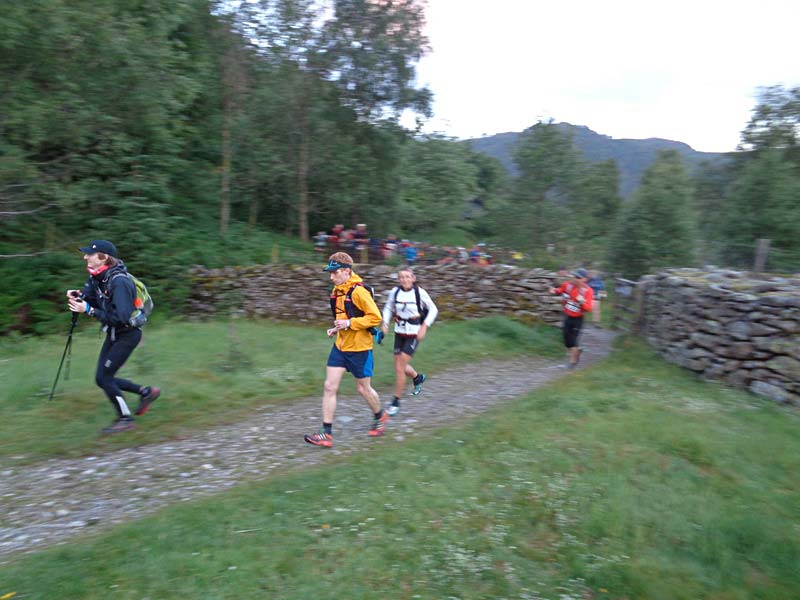 We left the summit for Esk Pike and passed others ascending from Ore Gap. Our route was faster but not by much. Around the Esk Hause CP a new group formed and I was pleased to see Stuart that I had run with before. We quickly claimed the next peaks with just a small blip on the wrong sub-summit of Great End. The rules asked that only those on Scafell Pike by 10am used Lords Rake and we arrived at 10.05 to a misty and deserted summit. I am not sure it mattered much. We moved fast as a group and gave each other confidence. Stuart led us to the Foxes tarn route and we were going well. A dislodged rock bounced down and hit my shin and for the first time in a year my odd injury there was noticeable, but thankfully not painful. Crossing between the Scafell summits took slightly more than half and hour and as we breached the top with met Andy with three others who had come up the Rake. Most had already planned on descending to Wasdale and I knew for me the Corridor route would not be fast so I was pleased we would be sticking together. The BG line  started with rocky scree and a few stumbles but once on the runnable grass it was fun. We ignored the suggested line on the map and went down steeply and directly to the wall that let us contour to Lingmell Beck for water and the rather crowded tourist path straight to Wasdale Head. Sadly Stuart went  down to Bracken close and I never saw him again. Climbing out of the valley I was almost glad Wind Gap was out of bounds. Ted, a Swede on his first visit to the Lakes, Andy , David and I jogged and plodded up the path and into the mist yet again. My long sleeve thermal went on yet again. It seemed to take forever to reach Pillar and I had forgotten just how far west along the path it is. Being with, and wanting to stay with, others spurred me on and we made good time to Black Sail Pass and then Beck Head. I started to think about Michelle on her JNC and hoped it was going well. At some point before now I had eaten 2 egg mayo wraps, a chia flapjack and 3 gels but now I was running on empty. We had been warned that the fell CPs would have water and not much else. They offered Clif bars and Shot Blocks but I knew I could not swallow those and run. It made the climb up Great Gable seem a huge hurdle but I was keen to keep the others in sight and scrambled to the top just in time to join them for the drop to Green Gable and then the run to Honister. It was a joy to be on a grassy gentle downhill. Honister was crowded with tourists, Billy Bland relay runners and GB supporters. We headed straight for the YHA to dib and claim our drop bags. I quickly changed socks and shoes at the same time as wolfing down chilli and rice, rice pud and cups of tea and coke. I felt fine but once we were on the coast to coast route I struggled. My quads revelled again and I felt queasy. Reluctantly I told the others to push on without me. I hoped I might catch them again but knew once I was running alone I would drop the pace. From the col behind Castle Crag we could see the whole Skiddaw Massif straight ahead taunting us. One last climb but what a monster. It took me an hour to trudge from Grange to Nichol End marine and now I could not face any solid food. I am sure my good run at Shap was because I ate so well and was cross that I could not seem to eat now. Gels and Chia charge would have to do. By Portinscale I revived a little and pushed myself to make up time. As I left Mill Beck and hit the lower slopes of Carl Side I could see David and ‘my group’ about 30 minutes ahead. I would not catch them but just seeing them spurred me on. Near Carl Side tarn Peter caught me up and we laughed at our pathetic attempts at uphill progress before he slowly pulled ahead. As I turned left for the final trig Peter passed me so he was only a minute or so ahead. It was chilly in the wind and mist plus it tried to drizzle. This and wanting to be back in Keswick somehow allowed me to up the pace; being downhill helped. I tried to catch Peter but although I spotted him a couple of times it was not to be. My watch showed that 15 hours was a certain and maybe even 14 hours 45. Spooney Green Lane was a treat- gently down on a good but softish surface; what a relief. When the A66 bridge appeared I was overjoyed. I finished in 14 hours 43 mins 57 secs- just 6 seconds behind Peter. Not managing to stay with David and the others was a shame but no longer an issue. The Grand Slam is still on and I was 3rd lady. True I was 3 hours behind Nicky who smashed the record and 2 hours behind Mary but I was happy. After a cup of tea from the RO I was still queasy so I hobbled back to the van to find Bob. A shower revived me a little and I was able to briefly chat with Andy and Stuart  who had just finished. Andy was sick but 1st MV60.

I retired to the van and collapsed on the bed while Bob walked into town for fish and chips. We later discovered that Dick had fallen on Gable and had been taken to Whitehaven hospital by mountain rescue. John V had stayed with him and sacrificed his run so big thanks to him. Hopefully Dick will mend fast- he phoned to tell me no broken bones but they have kept him in.

It was a great event and I quite fancy the Brecon Beacon version next year.

More lessons were learned of course. Firstly running with others spurred me on but led to me eating less. Secondly long runs like Shap are all very well but not the same as big hills in the Lakes and finally giving blood so soon before an ultra was not a good idea.

All I could think of on the M6 is why are there no laybys with vans doing bacon and egg butties! 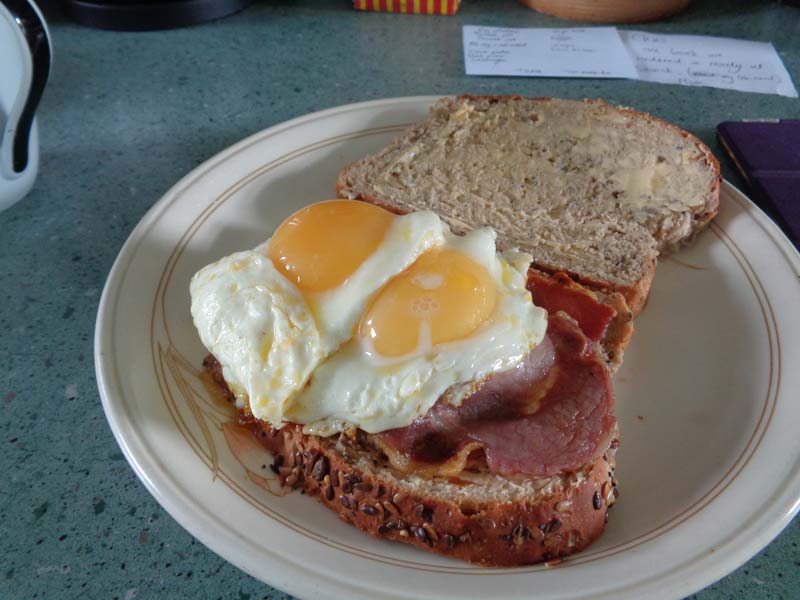