Around 150 runners were taken by bus to the race start at Thirlspot, under Helvellyn. It was good to catch up with some of the usual suspects including Annie and Andrew. Several said hello to me, but I couldn’t quite remember who they were; the ravages of the aging process. After the race briefing, and with dawn’s first light just breaking through, we were off, straight up Helvellyn.

Sticking to my now standard plan of taking it steady at the start, going at my own pace, rather than getting excited and following the lead pack, I reached the summit (Peak 1) in 49 minutes. Straight back down, via a bit of cross-country, through CP1, and it was the long haul up Wyth Burn and it’s famous bogs, which were particularly boggy.

With suitably wet feet, I reached Greenup Edge, on to High Raise, and down to Stake Pass. Views across to the Scafell Plateau framed the challenge ahead. I elected to stay above Angle Tran and take what is essentially the Bob Graham Round (BGR) route up Bow Fell via Hanging Knotts, meeting the first of several BGR groups. This is a fairly direct route and was probably the hardest part of the day for me. The other route via Ore Gap is probably less hard work and seemed to make minimal difference on time.

After summiting Bow Fell (Peak 2) it was down and up to Esk Pike, and down to CP2 at Esk Hause. The briefest of stops and it was a quick bag of the next 3 Peaks; Great End, Ill Crag and Broad Crag before summiting Scafell Pike (peak 6), all in the good company of a runner I now know to be ‘irish’ from the FRA forum! The forecast of a lowering cloud base was not evident as good panoramic views were had across the Lake District. Beautiful. Time elapsed 4 hours 52 minutes.

It was windy and a bit chilly on top so I tried to quickly put on my Omm Cypher jacket. This acted more as a sail and I couldn’t locate the sleeves as they flapped around. I gave up!

I steeled myself for the descent to Mickledore and then the ascent of Sca Fell. The logical route, to my mind, was to ascend via Foxes Tarn and descend via Lords Rake. The former seemed like the easier ascent, whilst the late avoided the re-ascent to Mickledore.

After the recent rain, the ascent was fairly wet but the summit of Sca Fell was soon reached. Peak 7. I had been playing leapfrog with a couple of Danes; they had elected to ascend via Lords Rake and were only about 50m ahead of me at the top. Scafell Pike to Sca Fell in 39 minutes. Whilst irish elected to descend Foxes Tarn, I dropping down Lords Rake. I was pleased that I had climbed up the other side.

The visibility was still excellent. I was having a great time. I was going peak to peak, checkpoint to checkpoint. Physically I felt really good and mentally I had an unerring belief in my ability to finish.

Picking up the corridor route to Sty Head the brooding mass of Great Gable awaited. The 2 Danes were still in the vicinity but it was evident that they didn’t know the route (not surprising) and couldn’t map read (surprisingly).

Great Gable was a long but steady climb. I maintained a steady pace and reached Peak 8 in 7:07. Without pause, it was straight down to CP3 at Beck Head. Pausing a little longer to fill water bottles, and have a quick natter, I looked up to see that the Danes had shot off and were already starting their ascent of Kirk Fell! I had a wry smile and followed the path under Boat How Crags to Black Sail Pass, meeting a few runners who had elected to drop down to Wasdale Head and climb Pillar first via Wind Gap.

Despite light drizzle (the only of the day), visibility remained good up to Pillar (Peak 9). 8:23 elapsed. Pausing quickly to locate my much-needed peanut butter and jam sandwich, I was soon on my way back to Beck Head. I discovered I was in 6-8th place. I now barely saw another runner for the rest of the race. Although only a single peak to go (Skiddaw), there was still a lot of ground to cover, firstly to Keswick and then the circuit up and down Skiddaw. I was still feeling good and really enjoying the day out aka the race! I felt totally immersed in the journey.

Onward to the next checkpoint at Honister, where a fell race was starting. This caused a degree of confusion as to where the respective CPs were located, but I knew ours was at the youth hostel. The clock showed just over 10 hours. Here I was told that only 4 long course runners had been through, although they weren’t entirely sure and I certainly hadn’t overtaken anyone. I changed into much appreciated dry socks, deposited my base layer in my bag, and off I went, munching on a Mars Bar.

Taking the road down towards Seatoller, I then followed the obvious path to Grange. I then took as straight a line as possible to Portinscale via the Cumbria Way and various paths. I was beginning to feel a little tired and probably walked a little more than I might do otherwise. However I was still moving forwards and at a decent speed. Skirting Keswick, I reached the final CP at Crosthwaite in 12:06, in a confirmed 7th place.

The final CP was also race HQ and the race finish. Afterwards, I read that several runners had found this mentally tough; to reach ‘the finish’ and then have to leave again. I had already considered this issue; on the way through it was a purely a checkpoint and it only became the finish on the way back. So good mental preparation really does help!

I was feeling really positive and really strong as I made my way to the start of the climb up to Skiddaw at Millbeck.  The views back to Keswick was great and clearly showed much of the ground that had been covered.

I was briefly in the company of another runner, who I now know to be Splatcher from the FRA forum. If you are reading this Splatcher, you look nothing like your profile picture!

Never having climbed Skiddaw before, I had heard that it was a long, steady drudge; and so it proved. I simply put my head down and maintained a really good pace all the way up. I dibbed at the summit of Skiddaw, Peak 10 of 10, my one new peak of the day, in 13:42 and quickly picked up the descent to the SE car park.

I made great time down and was running strongly as I joined the Cumbria Way towards Keswick and to what was now the finish. I can honestly say that I have never finished an ultra so strongly.

I crossed the line in 14 hours and 42 minutes, in 7th place. After a quick natter, a few obligatory photos with my medal, a change into my Likeys t-shirt for an equally obligatory photo, I said my thanks to all and started on the way home. 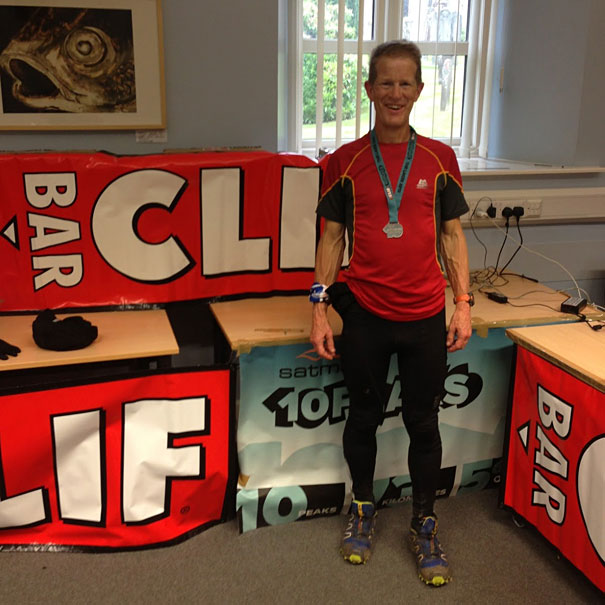 To read more about Richard’s running adventures visit his website