With Mountainous Ultra running growing ever more popular, we decided it was time to introduce an additional location in which to hold an identical 10 Peaks event to the one that had been running in the Lake District since 2010.

On 7th September 2013 the Brecon Beacons hosted the second 10peaks event of the year, copying the exact same format as the Lake District event that had taken place just 3 months earlier – 10 highest peaks, 24 hour cut-off time and navigation being a key component.

56 miles and 5000 meters of ascent stood in between the Long Course competitors and their finisher’s medal. A “short” course (short isn’t really the right description for a 38 mile mountain run), missing off a 30km section at the most westerly part of the course, would give those wishing for not such a brutal adventure to experience the best of the Brecon Beacons.

The poor weather forecast had certainly had an effect on numbers, but a hardy 200 or so registered on Friday night before slipping away into their tents for the last bit of shut-eye for possibly 24 hours or more.

The morning came far too quickly for most and after an early breakfast the long course entrants gathered around the back of Talybont-on-Usk Youth Hostel for the 4am start. Like nervous sheep they were funnelled through a gateway in single file, dibbing their Sportident timing chips into the start control box as they passed.

A 2km trail and road section led everyone up onto the open hillside, but those that had planned to race hard seemed to have no intention of taking this first section at an easy pace. A race quickly developed, with a handful of runners making it to the top of the first hill (Carn Pica) in three quarters of an hour. Darkness was still upon them at 5am as the short course competitors took their turn at the start line. Following the same route as the long coursers, the short course entrants now had “rabbits” to chase, easily seen as a steady flow of head torches snaking their way up the mountain in the distance. 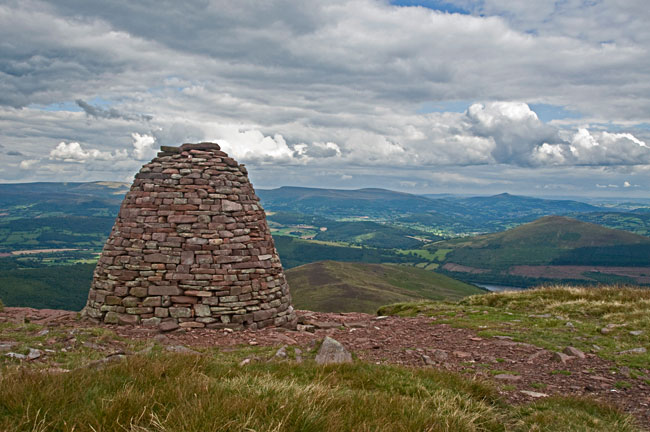 After “dibbing” at Carn Pica, many found the next section a little tricky with the early morning mist and rain adding to the already difficult night navigation. The sun soon rose however and the mist cleared to reveal clear skies, which fortunately lasted almost the entire day.

The second summit, Trig 642, was somewhat easier to find as visibility had become perfect. This is where the lead short course racers started overtaking those of the long course that were not so intent on racing but more relishing the challenge of completing the whole course in under the 24 hour cut-off time.

The first feed station, Pont ar Daf car park, gave all runners the chance to replenish water and food before continuing over the road and up towards the summit of Fan Fawr.

By the time the long course leader, Mark Palmer, reached the summit, he had 15 minutes lead over the second placed Jonathan Bamber, although Jonathan had a few runners within a minute or so of him. Andrew Ind, the short course leader, whilst almost an hour behind Mark Palmer due to his later start time, recorded the quickest time of the day to the summit, but Andrew could afford to race a little harder than those on the long course as his day could be over some 4 or 5 hours sooner. Andrew also had a 15 minute lead over his closest rival, Robbie Hayton, but the short coursers were less bunched than the long.

The female races were not so closely contended at this stage, with Jenny Howland leading the short course with a 45 minute advantage over second placed Katherine Farley. Katie Roby, on the other hand, only had 4 minutes on Clara Horswell on the long course, but these two were doing a great job of staying close to the lead men!

The Harvey map that the competitors are given has all the Peaks and Checkpoints marked, as well as having a suggested route plotted on it. Competitors are allowed to choose their own route so long as they visit all peaks and checkpoints in the correct order. Up to this point in the race, all competitors would have followed the same route with little opportunity to deviate. The next section from Fan Fawr to Fan Llia would be the first real chance to gain (or lose) time by careful route choice – a longer route staying on higher ground or a shorter, more direct route with an extra 100 meters of ascent?

Checkpoint 2 (the second feed station and the place where the short course separated from the long) was a short run off the top of Fan Llia, and this was a great opportunity for those needing a breather to sit down, refuel and take in the views. 25km down and the short coursers were approximately half way through their journey. The long coursers however, weren’t even a third of the way through theirs.

The next section on the short course offered competitors many different variations of route choice, a chance for the experienced navigators and those with local knowledge to pull back some time on the others. The Trig point on Fan Frynych was the next peak to conquer and with the weather still providing perfect visibility several minutes could easily be saved by deviating from the suggested route. Stories were told of competitors setting off from CP2 long after others but reaching the peak way ahead of them. Andrew Ind, the short course leader, was starting to feel tired at this stage and with no-one close behind him, he allowed himself to recover on his run down to CP5, Storey Arms.

Andrew reached CP5 after just 5 hours of racing, with Robbie, his closest rival, now 26 minutes behind. A navigation error by Andrew was all that really separated them. Jenny was sitting pretty in the ladies race, with a 45 minute lead but Katherine had not allowed her to extend this at all over the last 90 minutes of running. Meanwhile, the long course leaders had still not reached the western extreme of the course. Mark Palmer was still heading the field and looking very strong, even having time to stop and chat (briefly!) at the hot food station at CP3. With about 30 minutes lead, Mark powered off looking very much in control. Second place was now being very closely fought between Jonathan Bamber, Ed Bailey, Owen Rees, Ian Perryment and Jacob Larsen. They were all within sight of one another ascending Fan Brycheiniog but Ed was the stronger, putting 10 minutes into the others by the time he reached the top.

Katie Roby reached the top of the Black Mountain over 20 minutes ahead of Clara, who was now going through a little crisis of confidence having raced ahead of her running partner. A few friendly words from the mountain top marshal saw Clara re-focus and continue on her way, now alone but in hot pursuit of Katie.

It came as a shock to some, turning east and being greeted with clear views of the whole route that lay ahead – over 40km stretching across the Brecon Beacons to Pen y Fan and beyond. For some it proved too much, and the mini bus saw plenty of action shuttling retirees back to Talybont-on-Usk. For those continuing, the beast of Fan Gyhirych, Fan Nedd and Fan Frynych lay between them and Storey Arms. These 3 peaks would take a lot out of the long course competitors but would see them re-joining the short coursers heading back to the finish.

Mark arrived at Storey Arms after 9 hours of running, an hour ahead of Ed, who himself had a comfortable lead on the rest of the field. Four others were still battling hard for 3rd place. Katie however had managed to pull away slightly from Clara and now had a 45 minute lead. She still had the third placed male group in her sights though, so the last 15km was set to host a fierce battle.

The short course winners had already crossed the finish line by now with the race leader, Andrew Ind, comfortably arriving first. Having never raced an ultra before, Andrew commented on how surprised he was to finish so strong. Just goes to show what hard training can prepare you for. Robbie Hayton held on to his second place with Sebastjan Kocijancic finishing 40 minutes behind him in third. Jenny Howland, having completed the last 5 peaks in just 3 hours, was clear winner in the ladies race, over an hour ahead of second place Katherine Farley. Both were very pleased to be podium finishers, as was Sian Davies who finished in third spot, 50 minutes behind Katherine.

Mark continued very confidently on his home turf, extending his lead to 1 hour 45 minutes by the time he crossed the finish line, an incredible 11 hours and 17 minutes after starting. Ed Bailey finished second, 18 minutes ahead of Owen Rees in third. Most competitors on the long course managed to get back before the midnight rain, but the tail-enders had a tough night-navigation stage across the relentless steep slopes east of the A470, back to Talybont-on-Usk.

Katie Roby completed her 90km journey just over an hour quicker than Clara Horswell, finishing in an incredible time of 13 hours 48 minutes, 8th quickest overall. Clara was comfortably ahead of third placed Tracy Edwards, who had just been focused on completing the challenge so was delighted to find she had won a prize. 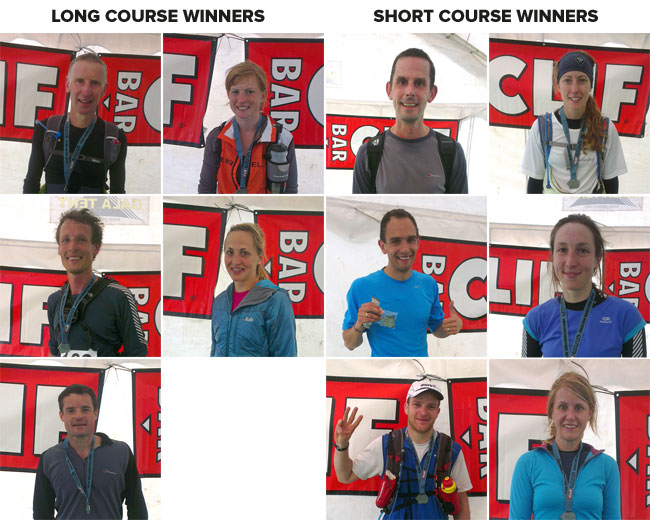 2014 will see the same Lakes and Brecon 10 Peaks events running on 28th June and 6th September respectively, BUT we have a new addition to the route choices, a new epic distance of 100km with 8000m of ascent, the 10 Peaks Xtreme – the toughest non stop race in the calendar. Entries are now open for The Lakes and for Brecon Beacons. We have also added pair and team options to some of the routes so 2014 promises to be a great year for a challenge!