I hadn’t been to the Isle of Man before, and to be honest, it had never really featured on my radar. This all changed though when I heard about the IOM 50km Ultra, which for some reason instantly grabbed my attention. It required a certain amount of navigational competence; would be a linear route (with 98% of the course being off-road); would take you from one end of the Island to the other; and involved 2500 meters of ascent! What more could you ask for from a race? I checked out the flight and accommodation options and when I discovered how cheap they were I signed up. 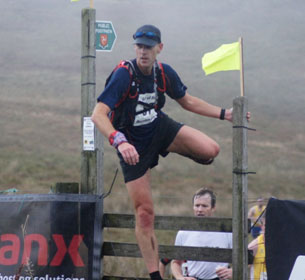 {Unfortunately, within a week of entering the race I developed an Achilles injury thereby thwarting all of my training plans, but when the race weekend arrived I thought I may as well travel over to enjoy the views and experience.}

The course takes a diagonal south-west route across the Island’s array of mountains and hills, to finally join up with the western coastal path and finishing in Port Erin. I was staying in an apartment at the finish location, having reserved a seat on the race organisers’ bus transporting runners from Port Erin to the start.

On the morning of race day I hopped on the minibus at 6am, joining a dozen or so other bleary eyed competitors. We were driven to Ramsey and dropped off outside the registration hall. Following check-in and a kit inspection, I spent the next hour chatting to a few competitors and it soon became apparent that most of the entrants returned year after year. This was a very promising sign in respect of the quality of the event, but a little worrying in that us new-comers may be disadvantaged by not being familiar with the course.

With very few training miles in the bank I was keen not to be a part of any early competition at the head of the pack. I did however get off to a reasonable start, keeping up with the front runners along the opening mile of flat section leading us to the base of the first mountain. As we started to ascend, I counted the runners in front of me and settled into a pace that I could hold reasonably comfortably – the last thing I wanted to do was push too hard on the first ascent (a 500+ meter climb) and find that my legs were then destroyed for the rest of the race. We climbed into the mist and cloud at around 400 meters but I had only lost a couple of minutes to the leader at this point, with 7 others between the two of us.

I lost another place before reaching the first summit, North Barrule at 565m, so was now in 10th position. Four kilometres of undulating ridge running brought me to cp2, which stood at 552m. I grabbed the orange clipper and punched my race card before descending down towards a road crossing. Dropping below the cloud base revealed a string of runners ahead of me. It is normally reassuring to see the man in front but on this occasion it meant that I had re-entered that competitive race and could no longer pretend I was alone on a training run.

Our next summit cp was the highest point on the Island, Snaefell at 621 meters. We were however starting from about 400m, so there wasn’t too much climbing to be done. I could see on the map that there was a railway station, a couple of large transmitters and a trig point all within close proximity of the top and figured that the small control flag may therefore be tricky to locate. I needed to benefit from some local knowledge, so as we entered the mist again I fought to stay within 20 meters of the guy in front. I would just need to borrow him for a few minutes to get me directly to the flag and then I could let him go if I needed to. I chased him to the flag, punched in, and set off down a track towards the next road crossing and water stop. As I approached, I saw a couple of runners stop to refill their bottles and, not needing to myself, I took the opportunity to jump a few places.

The next three or four mountain checkpoints required some careful navigation as the thick mist was still hanging over the hill tops. I was running on a compass bearing through thick heather but hit the cps easily enough. Each time the mist cleared slightly though I could see the locals banging along a motorway 40 meters off to the side.

Another water stop came into view but this time I needed to refill and take on some electrolytes. I was cramping in my legs every time I altered my stride pattern, which was concerning as I had only been running for 2 and a bit hours. 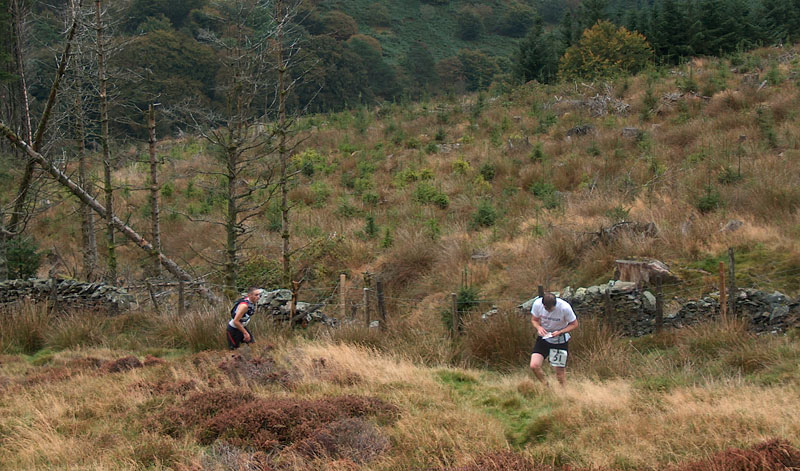 I took the next climb up Colden (at 480m) fairly easily, trying to conserve my legs, whilst forcing gels and salts down me. I was now amongst some new faces – Charlie, who had been leading the race at the start, and Mark, who must have caught me up. Some more careful navigation took me through the last of the mountain checkpoints and along some fantastic rolling ridgelines.

A short section along an old railway track followed, which allowed me to keep a consistent stride pattern and stretch my legs out. After a few km I arrived at yet another water station where I was told that I was in about 6th position. I caught sight of Mark having a rest stop and hoped that he would be stopping for a picnic, but unfortunately he spotted me and must have changed his mind, as he was soon chasing after me again, as was Charlie.

A collection of steep trails took us up through a plantation where I was re-joined by Charlie, who seemed to be very strong running uphill. He passed me but I kept within 50 meters or so of him for the next few kilometres. A great mountain bike single track then took us down through another forest area where I managed to get the jump ahead. I held this by a small margin and on through another water station. We now had an out and back climb of 200 meters up to the summit of South Barrule. Just as I set out on my ascent, the second placed runner returned from his. I could also see two figures way ahead of me up the hillside, meaning I had now edged my way into 5th.

The mist had disappeared now and had left behind it clear blue skies and sunshine. With perfect visibility, I could now see that one of the guys ahead wasn’t moving much, and the other was only moving slowly. After 5 minutes or so I caught the stationary guy and was surprised when he took a photo of me. It turned out he was a marshal, which meant that I must be in fourth position, not fifth.

After reaching the summit I turned around and headed back the way I had come. With Ben now firmly fixed in my sights I ran as fast as my legs could go, just managing to overtake before the bottom. I was only too aware that I now had Ben, Mark, Charlie and yet another guy, all very close behind me. With only 10km left to go, the first two places were probably already decided but I would certainly need to fight to keep my 3rd spot!

We now hit the glorious coastal path, but like most costal paths it had some very steep and nasty ascents. I was running on empty and only had plain water to see me through (I had run out of electrolytes and gels, having used them all to get me through my bad patch). I daren’t look behind me but I was imagining 4 hounds chasing me down. I would just have to run as hard as I could and hope that it was enough. 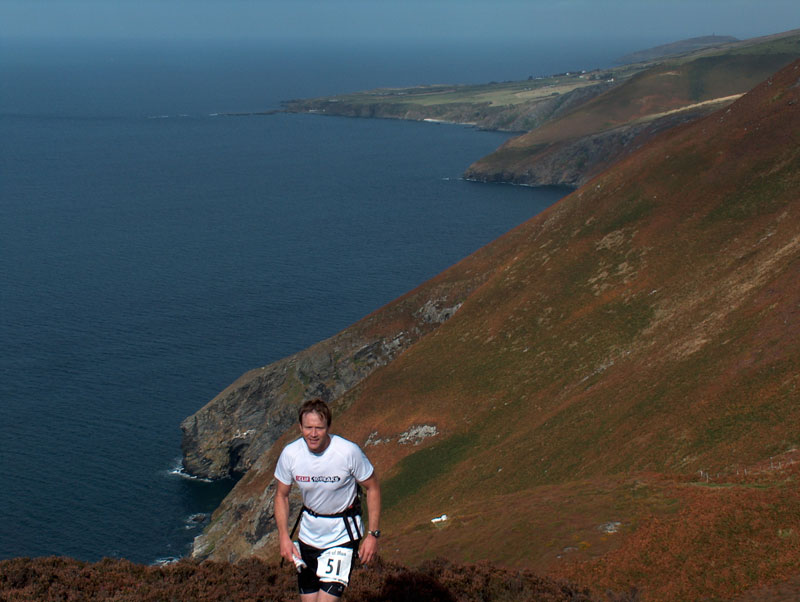 The final section has to be one of the nicest run-ins to a finish line that you can come across. Beautiful views of the coastline, cliffs dropping off to your right and the end of the Island stretching out ahead of you. The spongy grass was very welcome too, as my toes were now being sledge-hammered with every step.

I had been expecting to hear someone behind me as I got closer to the finish line but somehow I managed to hold on to third, finishing in a time of 6 hours and 7 minutes. Ben finished strongly in 4th, just 3 minutes behind me (he must have recovered well from his bad patch). The second placed Ian was just over 20 minutes ahead of me, with Rob (the winner) a further 11 minutes in front.

I must admit that it was a somewhat surprising, but very pleasing, result, which topped off an amazing day out. It was made even better still by being handed a beer at the finish line! Most finishers collapsed on the grass, drank their beer and stayed around for a couple of hours sunbathing and watching everyone come in. This camaraderie was absolutely typical of the whole race, and come to think of it, the Island too! The organisers have got a great location to play with and have used the Island to its full potential by setting a course that offers such variety of terrain. In only 50km you experience both North and South Wales, the Peak District and the Devon coastline. There can’t be too many races that can offer all of that. 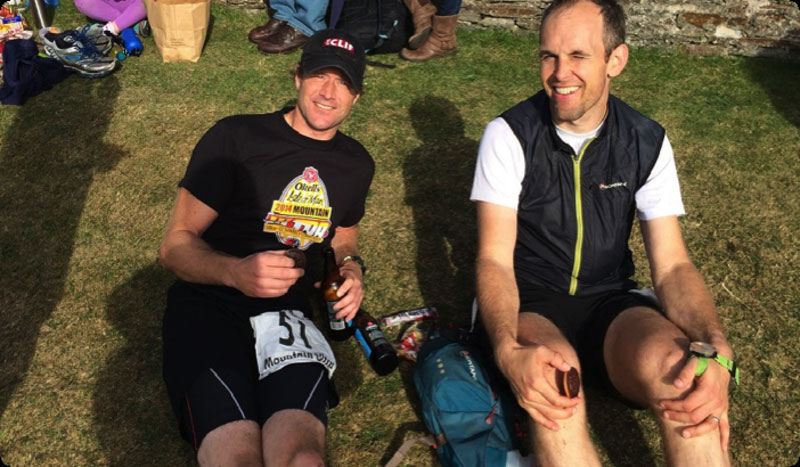 3rd October, 2015 will see the same race cover the same course for the same entry fee of £20. With flights available for under £60 return, and plenty of accommodation options, it is a highly recommended and cheap weekend away. More details can be found at http://www.isleofmanmountainultra.com/