Paul Posted in The Lake District, The Lakes 2011

Saturday July 2nd was a very long day for all 102 people who made it to the start line of the 2nd 10 Peaks Challenge. At 3.20am two coaches picked up competitors from Keswick for the 20 minute ride to the start at Swirls Car Park. It was fairly quiet on the coaches, not just because of the time of day but perhaps the dawning of the mammoth task that lay ahead. 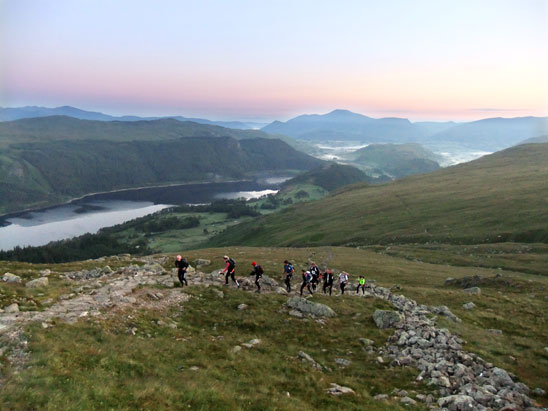 The climb to Helvellyn from Thirlmere

The first signs of daylight greeted us and we could see that it was looking glorious as the forecast had shown. At 4am, after a short safety briefing, the runners set off on their way up to Helvellyn. The walkers followed immediately afterwards. In complete contrast to last years event, the summit could be seen in the early morning light and it was more apparent how far it was to reach Lower Man. It was an incredible sight to see the sun rising over the fells which provided a welcome distraction from the 10 peaks we were to climb that day!

On the other side of the A591, check point 1 gave competitors the chance to fill up their hydration packs, pick up some bananas, chocolate and a range of sports nutrition provided by Team Nutrition and GU Energy. 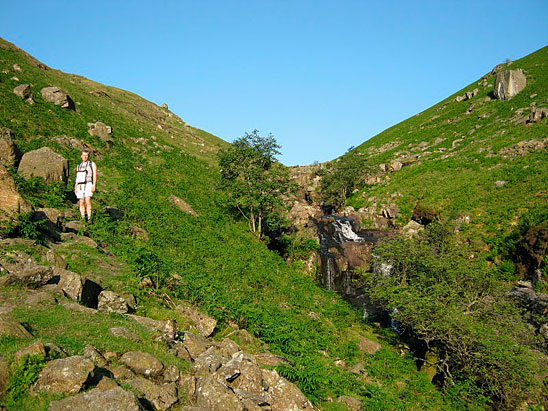 On route to The Bog in the early morning light

The long slog through The Bog began on route to High Raise. Conditions became pretty warm even before competitors reached peak 2 (Bowfell) and everyone was in good spirits. Once up on Bowfell, the route stayed on the high ground taking in Great End, Ill Crag, Broad Crag and on to the 2nd check point at Scafell Pike. Scafell Pike sponsors (Aqua Consultants) kindly set up the highest aid station in England, which meant competitors could pick up a much needed bottle of Lakeland Spring water and an energy bar each.

The summit of Bowfell busy with 10 Peakers 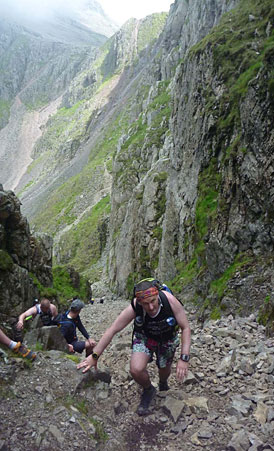 Lord's Rake - not for the faint hearted

After refuelling, the route split giving people the choice of taking either Foxes Tarn or Lord’s Rake up to Scafell. Those who didn’t fear the Rake saved a little time but both routes were tough going.

Then came the decision… whether to descend 900m into Wasdale or go back down Lord’s Rake and take the Corridor Route towards Great Gable. Those who decided to head down into the valley and climb up to Pillar via Wind Gap probably cursed their decision. I know I did.

“Climbing up to Pillar after running out of water half way up in the heat of the day made me dig deep, but that was what I designed the course for!”

However the thought of heading from Beck Head to Pillar and back after Great Gable was equally hard. Whichever route people took, the thought of a hot meal at Honister Slate Mine motivated people to push on. I particularly welcomed a jacket potato with chilli after eating only energy bars and bananas throughout the day.

The view towards Pillar with Wind Gap just left of centre

Those not wishing to continue at this point took the minibus back to Keswick, but over half the starters pushed on to the final check point at Nichol End Marine. Last year it was a different story with only 5 people making it past Honister.

Then came the final hurdle – Skiddaw. A long days walk on its own for many, but for the remaining 10 Peakers a sign that the finish was in sight! For most, the climb was long and slow in the dark, with only a head torch to illuminate the uphill path infront and the lights of the surrounding towns in the distance. But after Carlside lay the top of the 10th peak and 4th highest mountain in England.

As I stood at the summit at 12.50am I was certain that I would make it to Keswick before the 24 hour cutoff. But my confidence lead to laziness. I headed down towards the lights of Keswick and unintentionally away from the main path. A stream of 10 Peakers’ head torches in the distance showed us how far off course we were but several steep valleys blocked our path towards them. The terrain was the worst so far with steep banks, rocks, and bracken. It was taking 30 minutes to travel a couple of hundred metres. To make matters worse the switch on my head torch was playing up and my light kept flickering off. In one of the dark moments I lost my footing slipping down the bank, twisting my ankle and tearing a ligament in my right foot. I borrowed a walking pole from Will and limped on. It was starting to get light again as we reached the road, but despite faultless navigation from that point, we didn’t reach the finish at the Keswick Country House Hotel until 4.12am, 12 minutes after my own cutoff. Next year I will have to bring a spare torch, not just spare batteries! My thanks to Will who I had only met a few hours before but who waited for my while I limped home.

Almost 10 hours before us, the first place man, Adam Jackson crossed the line in a time of 14.30 hours followed by Ozzy Kershaw – 14.57, and Joseph Gale – 15.31. The first female finisher was Rebecca Lounds in a time of 22.26. Both the winners recieved a pair of Newton Terra Momentus Trail shoes worth £120 kindly donated by Newton Running.

Of the 102 starters 48 finished all 10 peaks. An incredible achievement and twice as many as I predicted would finish. The last place person to finish came in to the hotel at 11.15am, 31 hours and 15 minutes after setting off from Swirls car park, which was equally as impressive as any other finisher, having completed most of the course completely unsupported. 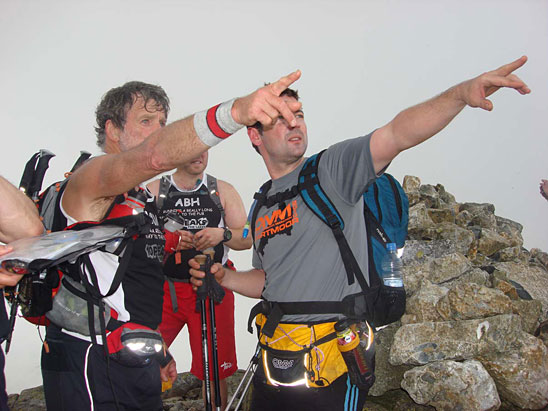 Next year we'll go that way

A huge thank you to all involved in the event, to all the marshals, the sponsors, to Aqua Consultants for providing the highest aid station in England, to Glenn from Care for Health for carrying supplies single handed to Beck Head and camping there for 2 nights, to Honister Slate Mine for catering for us and hosting check point 4, to the Keswick Country House Hotel for providing a great base, Nichol End Marine for check point 5, United Utilities for allowing us to use their land, and to all the competitors who raised an incredible £47,000 for Macmillan Cancer Support.