10 Peaks – The Return by Simon Franklin

Paul Posted in Race Report, The Lake District, The Lakes 2016

It had been 3 years since I ran the 10 Peaks Long race for the first time. A 24 hour challenge taking in the 10 highest mountains in the Lakes, it was the biggest thing I’d done up to that point and I really enjoyed it in 2013, taking 21hr 30min to finish it in the early morning darkness. It’s approximately 50 miles, but with 15,000ft of ascent and a lot of rough terrain and route finding.

That time I had joined up with two lads who had a readymade cheerleading team and we walked in the last 20 miles or so, which included a long flattish section back to Keswick from Great Gable and a single climb up and down Skiddaw. After a few larger challenges since I thought I fancied having another go and hoped this time to go a bit quicker with the benefit of more experience especially in climbing.

A questionable choice of accommodation overlooking the market square and the Moot Hall at Keswick enabled us to run out on the start of a friend’s Bob Graham on Friday evening. 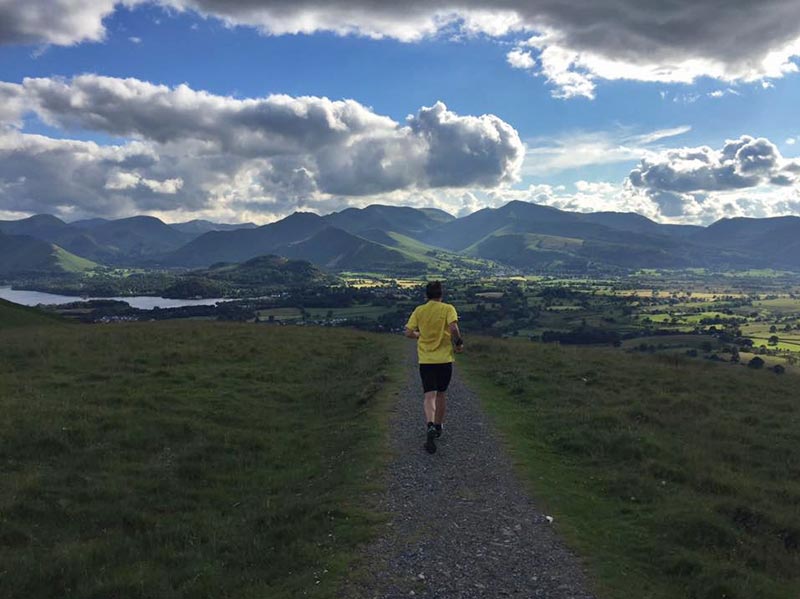 Unfortunately the room’s positioning also meant that we were still being kept awake by drunk people in the square when our alarm went off at 2:30am on Saturday morning.

The race starts with a coach drive to the bottom of Helvellyn at Swirls car park and at 4am we were off and heading up and above the midge clouds. As the sun rose behind us and set the tops of the fells out to the west on fire, we got the first peak and 3,000ft of ascent out of the way and then the first bit of route choice arrived.

The race has 2 out of bounds areas and the summits have to be done in a certain order but this leaves quite a few decisions on lines. As many headed off down the tourist path towards Wythburn, I dialled in the bearing Carol had worked out the night before and dropped down the steep Old Counties Tops descent, joined by two Horwich runners who I shared mutual friends with. They got the line spot on; I drifted right slightly but we rejoined the path ahead of those we’d split up from and continued down to the valley and then up the far side, through the area marked on the map as The Bog and on via High Raise to Angle Tarn and Bowfell.

It still early, not yet 8am, but it was starting to get hot. I don’t deal well with heat, but tried to keep drinking plenty and there were plenty of mountain streams to fill up from.

Just after Bowfell, my friend Andy, who was running the Short course, overtook us and yelled encouragement. He had started an hour after us and was flying. He went on to win the short race by 58 seconds!

Beyond Ore Gap, the tops started coming quickly and I skipped over the rocky ground and ticked off Esk Pike, Great End, Ill Crag, Broad Crag and Scafell Pike. At Ill Crag Tony and Albert, who I’d been running with, made the decision to convert over to the short course, so I continued on my own on the long course.

The second biggest route choice comes soon after Scafell Pike, and as I headed over the boulders towards Mickledore I joined up with a guy called Graham from Buckinghamshire. He had done the race once before and had taken the easier but longer Foxes Tarn option to Scafell that time He fancied trying Lord’s Rake though, and I offered to show him the way up. 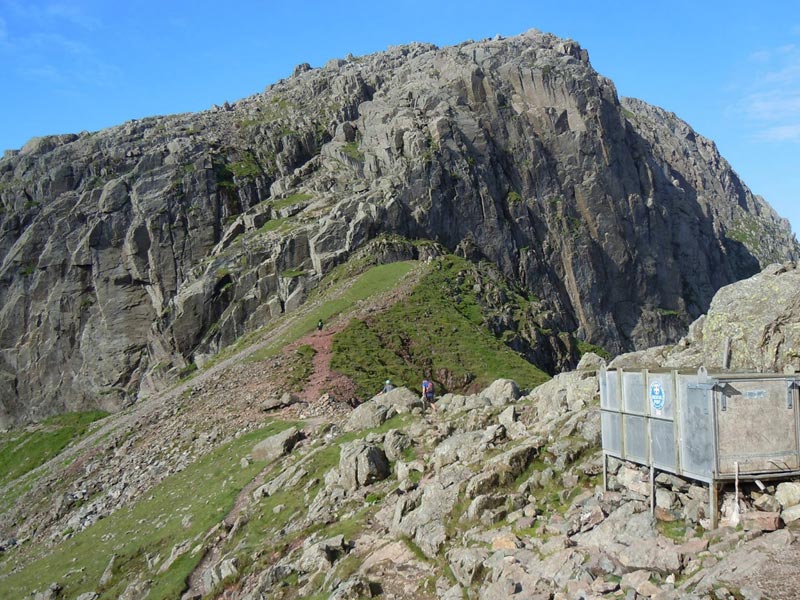 We had a fun time on the rock filled gully and then parted soon after summiting Scafell, as I was opting to drop down into Wasdale whilst he was heading via the Corridor Route to climb Great Gable first.

The glorious sunshine had brought the crowds out, and although my initial drop down the side of Scafell was nice and quiet, by the time I exited the scree run and headed towards Wasdale Head I was meeting tens of tourists starting the climb up England’s highest mountain. A quick stop in the shop for the Coke I’d been fantasising about and I headed up Mosedale towards Pillar. Less than a mile from the hubbub of Wasdale and now there was no-one around.

A steep climb up the skirts of the mountain and I was on the ridge. I soon bumped into Emma on her Bob Graham leg 4 as she headed in the opposite direction towards Kirk Fell, and after hugs and handshakes with her and her supporters I completed the out and back to Pillar. Here I met Graham again. As we were taking alternative routes, we couldn’t work out which of us was ahead and parted in opposite directions with half an expectation of meeting at the next major checkpoint at Honister.

The heat, climb and distance was starting to get to me by now, and the haul up Great Gable from Beck Head was slow and painful. At the rocky top the weather was changing and I had to take a bearing in the mist to find the drop down to Windy Gap and Moses’s Trod. I started the jog back down to Honister, by now knowing I was in need of food and energy. As happened several times, just at the right time I got the perk of seeing someone I knew; Daniel from my running club was heading out to meet some of his friends who were also on the Long course, and a brief chat lifted my spirits.

At Honister, pasta and more Coke awaited. Graham came in just before I left and we chatted before I set off down into Borrowdale. In 2013 I’d instead gone up the suggested route to the col near Dalehead, but Carol had pointed out the night before that there was an alternative route that involved no climbing, along the banks of Derwent Water, and I gratefully took it.

By now there were rain clouds sweeping in. I welcomed the drips of drizzle that started, and then suddenly had to shelter under a tree and put on waterproofs as it turned into a downpour.

I was keeping up a slow jog, but even compared to the walking in 2013, I wasn’t making very quick progress. As it had for the last 5 hours, Skiddaw reared up ahead, the final of the 10 peaks. I decided I couldn’t face the suggested steep route up via Carlside, and planned on the familiar climb up past Latrigg, Jenkins Hill and Little Man.

I’d not taken much food on board since Honister, and after a terrible convoluted journey through Keswick I started up on the last climb.

Time stood still as I trudged upwards, the only consolation the beautiful views across Derwent Water to Newlands Valley and Coledale and beyond to all the peaks I’d been up.

I pleased myself by forcing a gel slowly down whilst on the steepest part of the climb, but a swig of water afterwards proved too much, and back it all came. Bent double by the side of the path, I checked my watch. 1,500 ft still to climb, and it was obvious now I wouldn’t be able to make it to the finish in daylight. I thought about the option of stopping, but stopping actually still meant 5 miles or so of running back to Keswick. I carried on upwards, and the nausea abated.

As always, the weather on top of Skiddaw was several stages worse than everywhere below, and I headed blindly along the ridge until the trig point and a lone figure appeared out of the mist and rain. “Simon! Wait there, I’ve got something for you”, shouted the apparition, and I stood shivering as the marshal Paul came back from his tent with some red wine in a hip flask. I sipped it carefully and then it was about turn and back off on the final descent.

Gravity helped my progress and I slowly jogged back the way I’d come, with a brief stop to put on my headtorch, and for another bout of nausea.

The lack of sleep turned ferns into skeletons, roots into polished mahogany table legs, and most bizarrely, a large rock into my blue bath towel that I slowed down to attempt to pick up.

Just over 19 hours after starting I jogged back into the football club in Keswick’s Fitz Park, cheered by several friends who had been watching the tracker and come along once then knew I was on my way. Carol was there too. She’d finished 5 hours before me, and so had had the chance to shower, change and probably go for another run.

My initial reaction was of disappointment, as I’d hoped to take at least 3 hours off my previous time, but I think I’d overestimated the difference between my walking pace and my running pace at the end of a long day out. I also realised that difficult races are difficult however many of them you do.