My lungs are heaving and my legs are still aching from the brutal awaking they had 20minutes earlier. I glance down at my watch. Its 5.20am. Half way up the first peak of the day, Helvellyn. I am trying hard to keep as close to Mr White as I can, but he is slowly opening up the gap between us.

20 minutes earlier I had powered as hard as I could out of Swirls car park, determined to start the day as I meant to go on and happy to be finally away from annoying midges that had plagued everyone as we waited for the start of the 2013 Clif Bar 10 Peaks Short Race. Over the bridge and up to the gate that leads out onto the fell. Clatter! I hear the gate close again, a minute or so later. Someone is close and pushing hard. Sure enough, half way to the first summit I am passed by a guy in white and he is strong, fast and obviously an experienced mountain runner.  I ignore my complaining legs and just manage to hold the gap steady but I am well beaten to the first summit. With the first route decision of the day already made, I use a little local knowledge to get down to Wythburn Church as fast as I can, but hitting the forest at the wrong place meant almost a hands and knees crawl through dense trees and undergrowth to reach the forest trail.

At Wythburn I catch the tail enders of the Long Race. Into the first checkpoint and straight out again, with no sign of Mr White puts me in good spirits because I feel surely he cannot be ahead. On up the valley, pushing hard where I can. I cross the river at the valley head and take the opportunity to fill my water bottle. I had planned to skirt The Bog to the left, but seeing large groups on the other side, I checked the compass bearing for the best line to High Raise. They were right and I was wrong so I started to cross to the other side, taking the direct route, not bothering about the water and mud as I was already soaked up to my knees. I was almost half way across when the soft, squelchy ground gave way and swallowed me. I sank up to my chest in the wet boggy mud and for a second, feared that I might actually drown! Fortunately, I managed to crawl out, probably to the amusement of the people behind and luckily did not lose a shoe, for to have done that would have meant the end of my race. Once out of Wythburn Valley, the going underfoot improved markedly; drier and much more runnable. I chance a glace to the rear and see what looks like … could it be Mr White?  Good grief, this guy has really powered up the valley and is really pushing me.

Peak two, High Raise and then on down….fast…faster.. to Stake Pass and on up in the direction of Bowfell. No time for looking behind now, just keep going! There are three possible route choices to reach Bowfell summit, but having already decided which I will take, I pass a guy in the Long Race with a distinctive, memorable hair style, and start my scramble to traverse across the face of Bowfell to the Great Slabs. From there it is a quick hop up onto the summit, but when I get there, so is the guy with the hair! My mistake is now obvious. I had chosen a very slow route up Bowfell and it had cost me dearly.  But what of Mr White? Where was he? On his way to Esk Pike, having beat me to Bowfell!. Three summits completed; one to me, two to Mr White.

I set off in fast pursuit. Too fast as I lose the path and end up in rocky terrain where I should not have been. Concentrate. Get back on the path. Run. I start to close the gap, hitting the Ore Gap at a sprint and on up the lower slopes of Esk Pike, closing all the time.  Mr White is obviously very strong on the uphills, I thought. He beats me to the summit, but I manage to catch him on the descent, going through Checkpoint Three at Esk Hause with barely a pause. On up onto Great End. The tops are clear, the rocks are dry and there is virtually no wind. I look about and reflect that there is no other place I would rather be than right here right now.  I push on across the boulder field, first to Ill Crag and then Broad Crag. Mr White is close behind me and we arrive at Scafell Pike Summit almost together. Now I have another route choice to make, with three ways down to the Corridor Route. I need to pull some time and distance on Mr White. I need this because maybe he is one of those guys that finish strongly. I get onto the Corridor Route and sprint off as fast as I can. I start to pass walkers on their way up, and realise that, yes, it is actually still quite early in the day. I push on, glancing back there is no sign of Mr White but I feel sure he is there somewhere close. I cannot slow down, it would be too risky.

I start my ascent of Great Gable. It seems to take forever but the going underfoot is good. Feeling tired now. It’s taking a big effort to maintain pace. As I finally approach the top I glance back. Mr White! He is there, almost two thirds of the way up! Where the heck did he come from? No time to ponder it, I set off down the other side to Beck Head Checkpoint. When I arrived, there was no dibber, so the marshal took my name and I set off on the long contouring path to Honister. Along here it was pedal to the metal as I really pushed very hard, running nonstop except once when my shoe did not grip on a patch of mud and I sailed head over heels onto the ground. At Honister I saw Paul the race director on his way up Dale Head. Swiftly into the checkpoint, it seemed very dark inside but I was greeted by loud cheering and clapping. No time to stop though. Mr White is there….somewhere close. Dale Head was quite a haul, legs feeling tired now. A bit of light rain earlier made the descent into Newlands Valley very slippery, but managed to stay on my feet. Just the long flattish run in now, and this was the section I had anticipated being the hardest. Fields, track, woods, road, all passed by quickly though, as the finish drew ever nearer. And then suddenly it was over and I could rest. 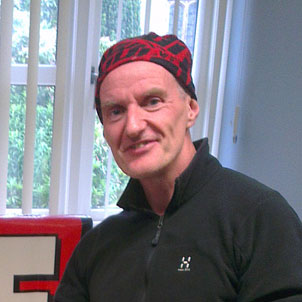 I had set an ambitious race time of 8 hours and just managed this by finishing in 7.54 although maybe I would not have done so had I not been chased hard most of the way by Tim Reid (Mr White) and I ensured that I was the first person to shake his hand when he finished. A good effort by everyone who finished and for those that didn’t, there is another chance next year.