On Saturday July 31st 2010, 52 people gathered at the foot of Helvellyn to attempt to climb the 10 highest peaks in the Lake District in 24 hours. Competitors including armed forces, adventure racers, triathletes, ultra distance and elite marathon runners travelled from as far afield as Germany and the Channel Islands to take part in the inaugural event created by Race Director, Paul Smith. Paul’s motivation was to raise money for two charities who helped in his father’s battle against cancer. A battle which he lost on 1st August 2009. Paul said, “I wanted to create an event which made people question what they could endure. An event which pushed people close to their limit before giving them a chance to recover and do it all over again – much as cancer suffers have to do with each dose of chemo. The Lake District seemed like the best place for such a challenge as it was an annual holiday destination for our family and a great place to remember my Dad.” 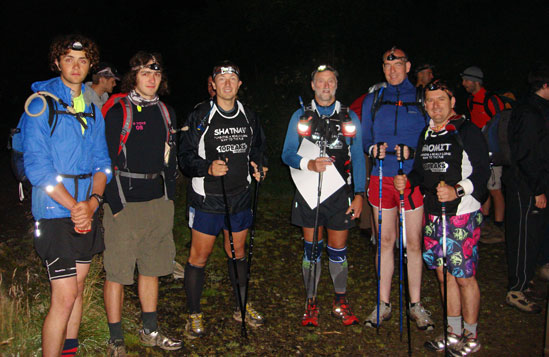 Teams and solo competitors pushed on from the shore of Thirlmere in total darkness at varying speeds. Some having never climbed a mountain before, others, members of the exclusive ‘Bob Graham Round’ club. The first three peaks were successfully completed by all 52 competitors. Tristan Horswell and Ben Watson lead the way with the tail enders already questioning if they had bitten off more than they could chew reaching CP1 two hours later. 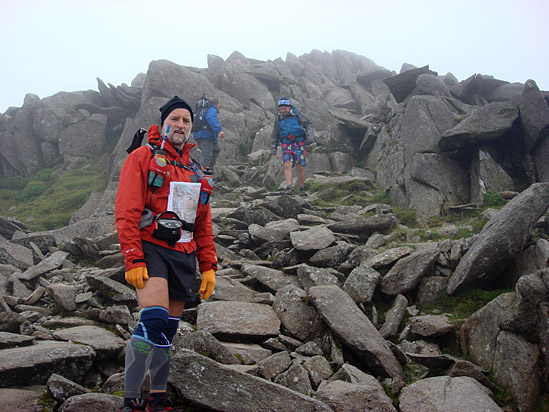 After refuelling with bananas and Lakeland Spring water, the long slog through The Bog began on the route up to High Raise, a substantial peak in it’s own right, but one that just happens to be on the route to Bowfell, the fourth of the 10 Peaks. Paul Smith’s team of six soon became five after Paul withdrew from the event having been suffering from a stomach parasite for the 10 days leading up to the event. The team, including co-organiser Simon Lindsey, moved on swiftly and accurately completing the first nine peaks and making their way to Honister Slate Mine, CP3, by 15.30. Meanwhile Tristan and Ben were the only team to successfully navigate their way to CP2 – a checkpoint kindly manned by Glenn and Farah who had carried 100 bottles of water up to the foot of Great Gable for the competitors! The conditions deteriorated as afternoon approached and competitors were met with heavy rain and thick fog. Visibility dropped below 10m making progress slow, wet and cold. Poor conditions meant no other team or individual made it to Pillar, instead opting to short cut down to CP3 to take on much needed hot drinks and food. 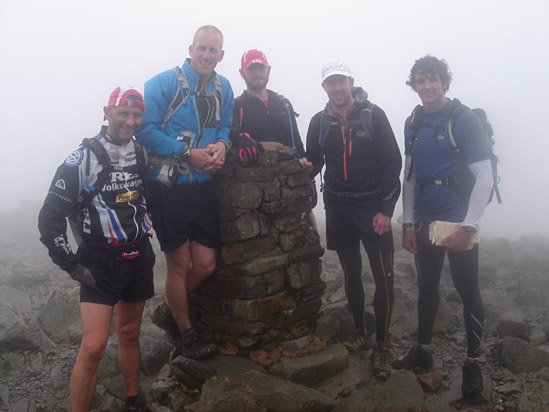 The bulk of the field spent the afternoon and early evening negotiating the Scafell range and Corridor Route before evacuating the peaks as speedily as they could!

Elite marathon runner, Fari Shams, sped on accompanied by Alastair Hamilton and David Snowling to CP4, but the temptation to get a boat ride back from Nicole End Marine to Keswick and the warmth proved too great. The only team remaining on the course as the evening progressed was Tristan and Ben who had opted to catch a lift to the foot of Skiddaw and tackle the final peak. Finally, at 10.30pm, a very cold but triumphant pair returned to base at The Keswick Park Hotel already planning next year’s attempt at all 10 Peaks.

The 10 Peaks slogan, ‘Nothing is impossible. Probably.’ held true, and the challenge still remains. Paul added, “Despite the miserable conditions, those that took part in the first ever 10 Peaks Challenge actually seemed to enjoy it. Even those that said they would never return are busy planning what they will do differently next time.” The event raised over £8,000 for charity and is set to return on 2nd July 2011.