Running a Really Long Way to the Pub 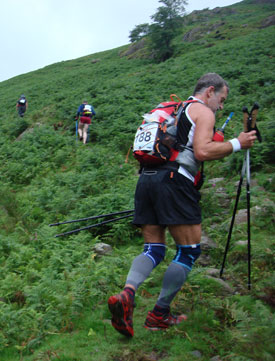 Took Gromit & Gormless on a little jog over the 10 highest Peaks in the Lake District covering a distance of 45 miles with 18000′ ascent on Saturday 31st July starting at 04:00 going up Helvellyn. Now this would be a real challenge when you consider Gromit has never been up a mountain before (unless you count Houndtor)!

52 started this inaugural charity event in what were reasonable conditions with cloud on the summits but otherwise dry with a fresh breeze on the tops. Shat Nav joined us on the first three peaks that went well and in good time with no difficulty. There followed a long trek up an appropriately named valley called “The Bog” to reach High Raise, while not one of the ten highest tops it is still a summit in its own right. As we started a traverse over to Angle Tarn the cloud started to blow off Bowfell allowing Gromit the treat of seeing the big mountain he had to climb! I wouldn’t say he jumped up and down with joy but was not intimidated by it and set about its ascent with a grin (or was it a grimace) of determination while Gormless responded with his usual enthusiastic exclamation of “Wow”. Once we arrived on the summit the mist came back to greet us to make sure we couldn’t see the fantastic views from the summit. Thereafter, the rest of the day saw the realisation of the MET Office forecast as bands of heavy rain swept through (I must bash up Mini Baah from the MET Office for not generating the better forecast for us that I had ordered). Combined with thick fog limiting visibility often down to as little as 10 metres, going was going to be slow.

I was in my element taking great delight in the navigational challenges as we wound our way around the next three summits, taking in two more for good measure (we had to cross them rather than it being my devious delight in making it more fun) although they did decline the offer to go up Ill Crag. 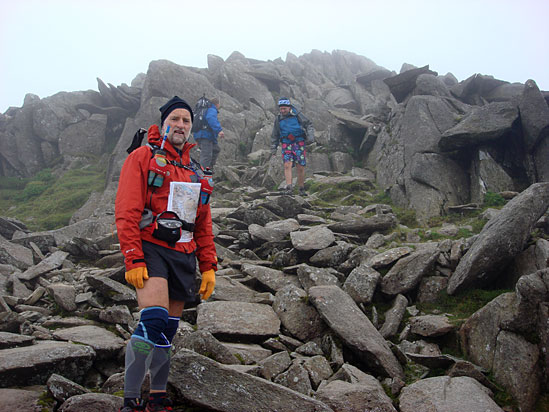 Gromit was understandably now finding the going to be increasingly challenging. He coped well in the dry, but once the boulder fields (which constitute the footpath) became wet it was like someone has smeared margarine over them (butter is too expensive and fattening). This resulted in his lack of experience on mountains causing him to find it hard to keep his balance and remain upright. Rather than fall and hurt himself we sensibly moved at a slower pace but luckily it wasn’t too cold, despite the obvious wind chill. This was no problem apart from the small matter of poor Shat Nav who was sheltering behind the Mountain Rescue box at Styhead Pass, patiently waiting for us as he froze in the stormy weather that took as much pervasive delight blowing over the Pass as it did over the summits. He had kindly brought up our packed lunch which was something that kept us going as our bodies started to grumble from being subjected the their thousandth Gel in what started to feel like the same number of hours.

As we approached Scafell Pike (England’s highest mountain) the crowds of people who had got lost on their way to Blackpool increased. Despite the poor weather we had to queue to get the proverbial summit photo.

The next summit Scafell is a dog leg and I warned Gormless and Gromit that hereafter every step we took would have to be retraced to this point before we would descend to the Corridor Route. There was not a moments hesitation from the group about going on which is a measure of their true grit (or stupidity).

I opted for the Foxes Tarn route as theoretically the safest as Lord’s Rake is reputed to be in a dangerous state. This proved to be a mistake that I will never make again. The footpath up to Foxes Tarn isn’t so much a path as a waterfall! Once we had ascended it passing the occasional dead sheep, Gromit asked in an agitated state “We haven’t got to go back down that have we?” To which I took no pleasure in reminding them that I had said that we had to retrace each and every step. Now a wise man might have reassessed going back down Lords Rake but I am not that wise (but seriously, not having gone up it first made me reluctant to go down it in thick mist and risking going the wrong way).

Having slowly but safely found our way back to Scafell Pike we had passed another group still on their way up and met up with another group who had gone via Lords Rake. We stayed together as a group as we stumbled our way across boulder fields until we finally reached the Corridor Route that contours around to Styhead Pass. G & G started to complain that this wasn’t good enough, this was far too nice a path and what was that below the mist, not a view! Luckily when we got to Styhead Tarn the weather turned on us again so they cheered up as they realised that the fun has only just started and that the challenge was far from over. Oddly having only waited for 4 hours Shat Nav had abandoned his post and left us with no lunch, the slacker (seriously having waited for half that time would have been kind of him – let alone 4 hours). Knowing he was going to see us at Honistor Pass (and trusting that the loaned GPS unit might help him avoid going to Hard Knott Pass) we set off along the Climbers Route contouring around the SW flank of Great Gable. In the mist and wet it was far from easy to find and even harder to follow but eventually we did reach Beck Head and so a safe crossing to Honister Pass. We had wisely decided that time was against us and was going to retire, not knowing that everyone else had also taken the wise choice of retiring. Our hats go off to those teams starting and successfully completing the Bob Graham Round today in these challenging conditions. I feel that under the circumstances, combining both the poor visibility, wet and slippery rocks and the fact that Gromit had never been on a mountain before, we can justifiably say that while we did not complete the whole challenge, we did NOT fail. How can going some 28 miles, 10000′ ascent and descent, crossing 7 or the 10 highest peaks and 3 other summits in 17 hours be considered a failure! 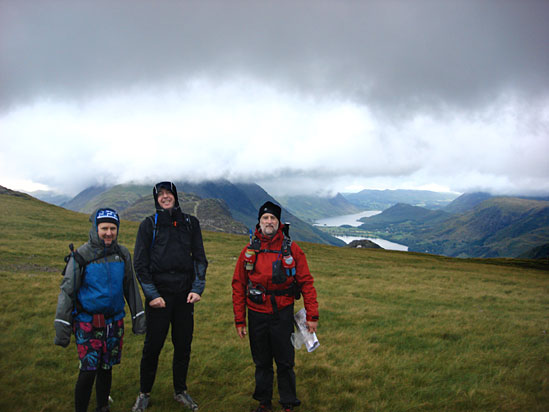 Sir Limpalot & Ben Dover opted to not do the dog leg over to Pillar, but being as mad as me got a lift to Keswick and then finished the day by going up Skiddaw successfully completing 9 of the 10 Peaks, well done you mad fools!

Unfortunately we got stuck with three others that had joined our group who we had to repatriate to their cars. This resulted to our being forced to stop at a Pub where I had to force pints of beer down Gromit, Gormless and Shat Nav, who can now live up to the quote on our custom made shirts “Running a REALLY LONG WAY to the pub”.

On On to next year and better weather for a second successful attempt. Now the training starts, what shall we do next, not sure yet but I am sure I will think of something…..