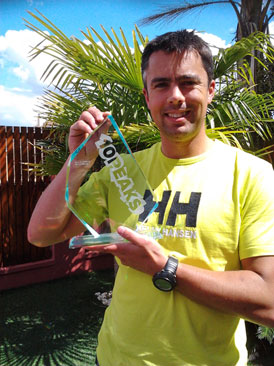 The Satmap 10 Peaks is Macmillan’s toughest charity event which is run for free by the organisers in an effort to raise as much money for charity as possible. Each year the highest fundraiser receives the 10 Peaks Trophy engraved with their name. Ian Hollis was last year’s winner who raised over £2000 for Macmillan! Ian will be travelling all the way from Spain to take part in the event and has his eye on the trophy once more.

The highest fundraiser this year will also receive a Satmap Active 10 GPS unit worth £300 so there is even more reason to set up a fundraising page or hand out some sponsorship forms. The winner will need to show evidence of their fundraising and will be sent the prize and trophy about a month after the event.