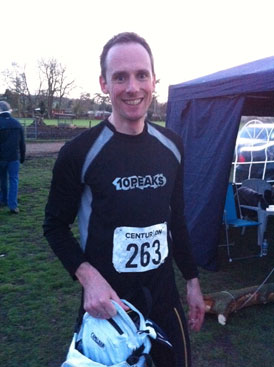 My preparation had been short but reasonably successful. March 3rd was the day I was going to find out whether I could run 100 miles with only 7 weeks preparation. Those 7 weeks included time to taper so it was always going to be a big ask!

Having taken part in many Ironman races before I know that it is easy to set off on a mental back foot when you see super fit athletes walking around town the evening before an event. Why they have to wear their tri-gear for dinner I will never know! But on entering the registration room in Richmond town hall things were slightly different and that wasn’t purely down to the temperature. Runners sat around the edge of the hall, some in an almost meditative state, saving their energy for what was to come.

I was shaking with cold before the start at 10am but I was looking forward to what was to come. I had a plan. I didn’t know if it was a good one, but it was a plan none-the-less. I would run slowly for 40 minutes and then walk for 5, eating in my walking periods. Then repeat knowing that over time the 5 minutes breaks would extend and the 40 minutes of running would decrease. I chatted to a few people on the way round finding out what their plan was. Some were doing 55 minutes/ 5 minutes others running 100 metres and then taking a few walking strides. I would never get a chance to chat to the winners, perhaps they don’t bother with the rest periods.

The first 28 miles of the course brought back many memories having lived along the route for most of my life. Richmond – sledging down the hill with my Dad and brother. Kingston – my marathon PB of 2.58.28 involved running three laps from Hampton Court to Kingston Bridge. I knew it well and had run that section of tow path hundreds of times. Walton – the turn around point for my long runs; Chertsey to Windsor – marathon preparation for London 2005.

At around 22 miles I started talking to a runner by the name of Jay. It was his first 100 but unlike me he had done a couple of 50+ races in preparation including the London to Brighton and the Thames Trot. We were both running at the same speed so ran together for the next 8 or 9 hours. We reached Henley (51 miles) in good time and enjoyed hot soup and a hot dog. I also treated myself to my first cup of tea in 15 months, now was the time for hot caffeine. We’d left Henley by 8pm and I was concerned that I had started too quickly. I was over an hour ahead of schedule and we were well on track to run a sub-24 hour 100. That would have been the icing on the cake, but my main goal was just to finish. I was already thinking by that point that I could probably walk the rest and still finish within the 30 hour cut-off.

The night section was hard, very hard, both physically and mentally. Each aid station seemed further than it appeared on the map. Once past Reading I asked Jay to go ahead. It had been great to run with him but I was slowing him down needing longer and longer walking periods and suffering with stomach cramp and blisters on both heals. The shoes I was wearing were the same shoes I used in the 2008 London Marathon which goes to show my mileage is on the low side especially for ultra. I knew they would give me blisters but I had done all my preparation in them so thought it best to go with them on the day rather than trying something new.

Soon after Reading on entering a boat yard I came across a strange sight. Batman and Robin eating take-away pizza off the bonnet of a friend’s car. Batman and Robin were taking part in the 100 and not only that, they had also run a 5km race in Richmond Park before hand! They kindly invited me to joined them for a slice of pizza and then I pushed on.

I slowed down worried that I had over done it earlier in the day but I was still walking at a good pace. To my surprise coming on to the bridge at Whitchurch (67 miles) I was told by a marshal that I was 30 minutes off the pace for 24 hours. This was a mental blow as I had 24 hours in my mind as a goal within a goal. I disagreed, but the seed of doubt had been sewn. I remember at the Whitchurch aid station the marshal saying that it was only 33 miles to go. Only one marathon and a 10k still to go. I was trying not to think of the big picture and just taking each aid station at a time. It was only 4 miles to the next one. It seemed like 6.

I had decided to take longer at the next check point to give myself a chance to warm up and recover a bit. Perhaps that was a mistake as I never got up to speed after that. There was frost on the ground and I wasn’t able to get moving fast enough to keep warm. The mental battle had started now and part of me was asking “what am I doing here? – maybe they’ll be a B&B soon and I could have a little sleep?” and the other half of me was saying “just keep moving forward, you can walk to the finish and still make the cutoff”. It was 9 miles between aid stations but it seemed to go on forever.

My water proof certainly wasn’t the most breathable on the market which is why I hadn’t put it on but I was getting colder so when on Benson Bridge at 77 miles I decided to sit on the stone bench and put it on in an effort to keep warm. I soon realised that was as far as I was going to get. For a reason still unknown to me my right hip flexor had just stopped working, it was as if it wasn’t there any more. I literally couldn’t lift my foot off the ground. Hitting it and shouting at it didn’t work, so I tried to get it moving again by using both hands to lift my right leg forward but progress was painfully slow and when I reached the other side of the bridge I decided to call it a night. I waited 30 minutes until 4am when I waved down a cab who took me to the Benson aid station.

I spilt half of my soup as I was shaking so much but at least I got some warmth inside me. There was an ambulance at that aid station who was heading off so I got a lift to the finish in Oxford with another runner who had hypothermia. The paramedic helped me in to the finish tent where I sat waiting for my lift back. I was sitting in among the elite of the ultra running community included Mimi Anderson who had won the women’s race and was 8th overall. I didn’t deserve to be in the finish tent and especially not at 5am but I couldn’t move so there I stayed until my lift arrived.

Strangely for me I wasn’t too disappointed to have given up at 77 miles as I didn’t really have any choice. I had still managed nearly 3 marathons which was a whole marathon further than my previous longest run. I had enjoyed the experience and knew that I would return having done more than 7 weeks preparation. The organisation of the event was fantastic, all the crew were so helpful, and the River Thames, beautiful as ever, provided a constant mental diversion.