4:00am, Saturday 2nd July, over 100 of us gathered in the Swirls Car Park by Thirlmere lake for the 2011 10 Peaks Challenge. After last year when no-one managed 10 peaks, the numbers had now doubled and there was a very young and athletic feel to the occasion, all wanting to be the first competitor to complete the tough course. The course travels about 45 miles over a route that includes the 10 highest summits in the Lake District, some 18,500 ft of climb. 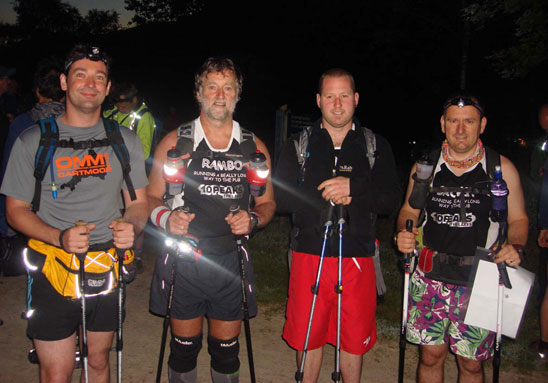 Me, well I have mountain experience now – 7 to be exact. Yes the 7 that we conquered at last year’s event!

This year’s team was one of fine athletic ability, consisting of ABH, Buggered, Rambo and myself. I was of course oozing with confidence after improving my time for many races this year, losing approx. 1/2 stone in weight and successfully completing three 30 mile plus training runs in the build up.

We set off up Hellvelyn. This felt quite slow going although I was particularly making sure that I didn’t over push too early. The weather was fine and we enjoyed the sunrise over the mountains to the east of us. We reached the summit 1 hour 10 minutes in, some 2,300ft climbed – not bad going! We flew down Hellvelyn back to Thirlmere lake and to the first check point. We took on some energy gels and plenty of water as the next opportunity for energy or water was many hours away.

Off up the valley known as “The Bog” it was wet under foot but felt as though it was a bit easier going than last year. There was a small pond that I discovered when I disappeared into the ground and was waist deep in water. Going by the smell the water was nutrient rich !! We climbed up High Raise, which although is not one of the 10 peaks, is a large mountain in it’s own right. We’d climbed 2,000ft to get to it so it felt like a decent mountain to us. We were 4 hours in and feeling OK. We could see angle tarn and Bowfell ahead, part of the Scafell Range, where many of our peaks were. The route to Bowfell was not too bad and we made the summit after 6 hours 20 minutes.

We then climbed another mountain, Esk Pike. This again was not one of the 10 peaks but felt like it should have been ! We could see all of our peaks – Great End next, Ill Crag, Broad Crag, Scafell Pike, Scafell, The awesome looking Great Gable, the very far away looking Pillar and the farthest point on the horizon Skiddaw. Hellvelyn looked far away behind us so a bit of comfort there! Great end was OK although felt a bit out of the way. Ill Crag and Broad Crag were basically boulder mountains but I felt ok on these boulders this year. They’re much grippier in the dry ! Then the climb up to Scafell Pike – the highest point in England and where we would be able to top up on desperately needed water and some more energy bars, and meet my colleagues from Aqua who were manning the Scafell Pike check point. We reached the summit at 12:20. Unfortunately there was no water and also no Aqua team except Josh’s wife as the rest had gone back to Wasdale to top up on water! 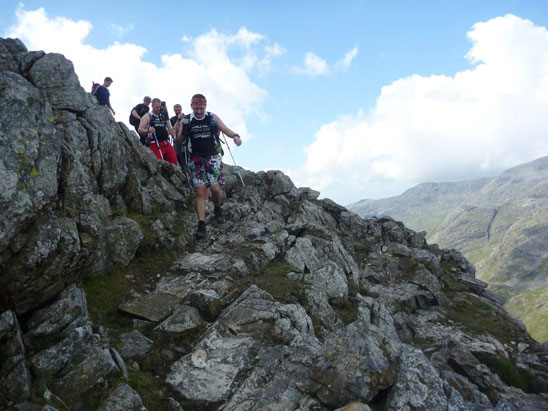 Next was Scafell, probably the most tricky of ascents. We were asked by the mountain rescue teams to wait while an injured runner was being airlifted away. As we descended down towards Lords Rake we passed another person being treated by Mountain rescue. This was not good when you see the number of casualties and then Lords Rake ahead of you and the boulder at the top, waiting for it’s moment to come crashing down the Rake! We climbed up Lords Rake without too much difficulty. It is a narrow slope of loose rock and scree. The main trouble is every step you take you send some lose rock onto the people behind you. We got around the boulder at the top which was a relief at the time and then climbed up another rake to get around to the main body of the mountain.

We climbed up to the summit and after 9 hours and 36 minutes we had conquered 7 peaks. Not bad for a day’s work, so far !! Next was the change in plan for this year – drop all the way down to Wasdale, spend an hour or so on normal flattish land and then climb up to Pillar. Although more climb, after last year’s terrible weather it would have been quite a relief to get to low altitude for a bit. The descent was not easy, we boiled at high temperatures down at Wasdale, had an interesting “mountain of poo” experience in the public toilets and then the steepest, horriblist climb up that I’ve ever done in my short mountaineering experience. Once we’d got to Wasdale a look at the time did not convey good news. We’d used up all of our buffer and the only way we could make it to Honister before it closed was to speed up. There was no chance of that. The climb was steep, the rocks were loose, it was hard, hard work and we had to stop on occasions to rest and take on water and food. I felt as though I had completely drained of energy and I was only half way up the mountain. The others seemed to be able to ascend more quickly than I so I now felt as though I was holding the team up. It took at least 2 hours to get up Pillar. When we eventually reached the summit the team was low. We knew we were not going to make it and were just going through the motions. We’d all put in lots of effort and we felt really good at various moments throughout the day but it was just not enough in the end. 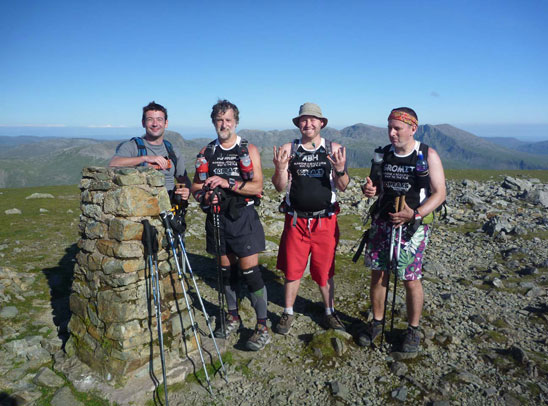 Rambo was insistent that we all climbed the 9th Peak, Great Gable. Buggered and I weren’t that fussed but if Rambo was going up then so was I ! We got to Beck Head but there was no check point. It had closed long ago. We climbed up Great Gable – a most awesome mountain. Certainly one of my favourites to see from miles around with it’s distinctive shape, like an upside down cupcake. Reaching the summit felt as though we had achieved today, not failed. 9 of the highest 10 peaks in the lake district is beyond the capability of many. 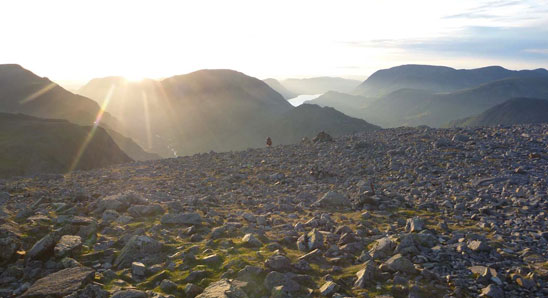 The sun was starting to set and we had booked a cab to pick up up from Honister Pass so we had to get a move on. With us managing various walk / crawl motions, Rambo took it upon himself to run to Honister to make sure the cab didn’t go without us. We achieved another summit on the way, Green Gable, but no time to waste!! There’s no phone signal for about an hour around Honister and we didn’t fancy going back up Great Gable in the dark just for a phone signal! I was able to run for a bit which was good and showed that although I had drained of energy, there was still something there. We arrived at Honister and only waited 5 minutes for the cab to show up. Back to the Hotel and the finish. We sipped Champagne to celebrate our 9 peaks.

Sleep wasn’t an issue that night. Out for the count is the best way to describe. I was up at 8am and went downstairs to let the B&B lady know that we’d all be down for breakfast in 45 minutes. My trouble then was attempting to go back up the stairs. My legs were completely shot ! Instead I stayed for a cuppa and chatted to Paul. As other team members hobbled to breakfast we chatted about what to do with our day.

We discussed going on a boat or sitting in a pub but the semi joke of conquering the 10th Peak Skiddaw soon became a reality. All in the room couldn’t believe we were stupid enough but we were. I used walking poles to get down the stairs and to aid our walk through Keswick and the long long climb to Skiddaw. We had plenty of entertainment on the way in the form of the annual Skiddaw Fell Race and Skater Dudes coming down the mountain on skate board type things. We climbed and we climbed and eventually we made it !

The ten highest summits in the Lake District and a real sense of achievement and respect for these mountains.

So on on until next year. Is it possible someone like me to get around within 24 hours?

To view Grom’s report with all the photos download the PDF here: 2011 10 peaks report